A flirt with the arctic circle in IJsland

I am honored by the request that I write a preface to the new book:`Flirting with the Artic Circle` by Marcel van Balkom. It’s a book full of spectacular images of a very special island which fascinates us both. Not only does this island offer beautiful landscapes and a wealth of wildlife, but its remarkable geographical origin has resulted in a multitude of visible and dazzling volcanic and geothermal consequences.
However, while I was going though the material made available by Marcel for inspiration, slowly but surely an increasingly clear conviction came over me: this book might deserve another title. The one that was chosen, `Flirting with the Arctic Circle`, became more and more lost in `Flirting with Time`. The theme involving time became increasingly recognizable to me in Marcel’s gorgeous work. The longer and the more he showed the nearby Arctic Circle, which Marcel chose to mention in the title, the more it seemed merely incidental to me. Because…..
Hardcover
Formaat 270x270mm
Taal Engels
Fotograaf Marcel van Balkom 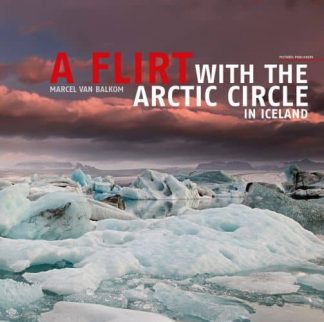 Je bekijkt nu: A flirt with the arctic circle in IJsland €22,50
In winkelmand