I Made Surita painter of Bali

In the early twentieth century art criticism, influenced by the latest developments in psychology, focussed on art by children, folk art, naïve and primitive art. It was not necessary to train at a drawing school or an academy to produce high-quality art, it was now claimed. Ever since man started decorating his caves with paintings, the urge for self-expression has remained a primary human need. Even with today’s children, drawing is a more ‘handy’activity than reading and writing.

Wherever one may roam, to whichever culture one is initiated, all over the world one finds children whose daring, natural and original way with drawing seems beyond belief. Indeed, when it comes to drawing, countless children seem entitled to be called prodigies.

It is also known fact that those same children who are so greedy for any bit of drawing paper they can put their hands on, will not be persuades to put anything on paper once they are past age eleven. They suddenly become allergic to drawing paper. Intellect has intercepted spontaneity. The thought processes cause doubts. ‘Draw a fish’. ‘What kind of fish?”A fish has two eyes, how am I supposed to draw those?’ If that critical child had been a few years younger, the fish would be swimming merrily about on the paper in an instant, scaleless and with one eye.

Yet  a child with an authentic gift for drawing has no reason to fear the big bad rationality lurking in the grown-ups’wood. That gift will survive any training or the lack of it. Whether the true talent is conversant with aesthetic principles and optical laws or not, it is so bold as to use its own eyes and its own little grey cells. Academies are useful places which cannot harm the gifted ones. Or, for that matter, the ungifted ones.

Take Surita. Is he happy in his profession? Very much so, by the look of it. He thinks of himself as a naïve artist, a traditionalist, an autodidact and a lot of other things, and perhaps also as the opposites of all those things. Perhaps he hardly knows what he is supposed to reply when one confuses him with such pedantic inquiries. He has succeeded in developing his gift, aganinst the grain, to some extent. He is not merely a wise but a learned man who writes on art in the local papers of his village – in the cool hills north of Ubud. Unhurriedly he has moved ever closer to the discovery of his mature style, which is rooted in tradition, in his landscape, in the rites and customs of his little world. Surita is a not-so-everyday observer of everyday things. He knows his worth and is aware that his truths do not have to reach beyond his village, his hills, that fragment of the very earthly mini paradise which he can survey with his own eyes.

Bali is an island with a high population density. This population speaks one language and practises one religion: Hinduism. Surita incarnates traditions which his public upholds and understands. What has his art to do with the emancipation of children’s art mentioned at the start of this story? Might it be safe to conclude that some of the true child prodigies of modern art are patriarchal talents of the Surita type? 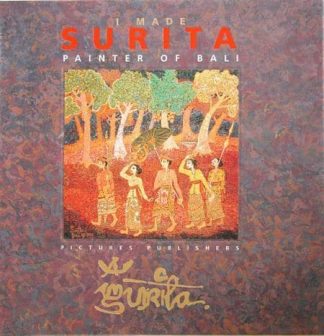 You're viewing: I Made Surita painter of Bali €22,50
Add to cart