‘I am an impressionist, Sir’

This characteristic statement was made by the Belgian painter, Adrien Jean Le Mayeur de Merprés(1880-1958), during a retrospective interview on his life. For a twentieth century painter to describe himself in such a way might have seemed somewhat dated to his contemporaries, but Le Mayeur was not attracted by modern schools. What he sought was light, colour and beauty, a quest which took him to faraway places all over the world. Finally, at the age of 52, he discovered his ideal location, the Indonesian island of Bal. There, he married his favourite model, a young Balinese girl whose name was Pollok. Together they set up home at Sanur beach on the south coast, and over the course of the next years, played host to a number of their friends and travellers who visited the island. Today, more and more pople are intrigued by the oeuvre of this relatively unknown artist, and Le Mayeur’s Balines works are rapidly gaining popularity with a growing number of devotees.

In this book, we will focus both on the Balinese period and on the time which preceeded it: the artist’s formative yars in Belgium up to World War I, and the period when ‘le beau peintre voyageur’ was off on his unceasing quest for inspiration in exotic corners of the world.

All Le Mayeur’s work is characterised by the rendition of light and colour. As a luminist, his approach to light as it plays over leaves, naked skin, or water is immediately striking. As a colourist, his chief trademark is a special colour palette: purples, pinks, and red, often personally developed. In his heavy use of thickly applied paint and the avoidance of detail, Le Mayeur is confirmed as alate adherent of (Belgian) impressionism, a classification he himself claimed when, without undue modesty, he informed his friend the Italian painter Renato Cristiano, tha he thought of himself as ‘the last impressionist’.

The colourist ‘pur-sang’ whose canvasses stand out for their vibrant cheerfulness, was the kind of painter who devoted his life to art because it was unthinkable that he could do anything else. He was completely obsessed by painting, and although his works were widely exhibited in his lifetime(receiving, for the most part, enthusiast reviews), he is remembered now, if at all, merely as a ‘painter of Bali’. It is because so little information exist on this fascinating Belgian artist that this volume has been compiled. In it, we will set out to explore something of his life, his work, an a little of what he was as a person. It is a homage long overdue. 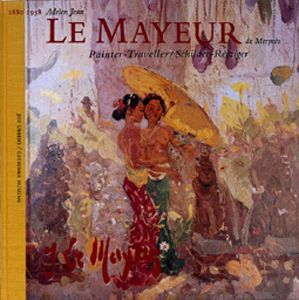